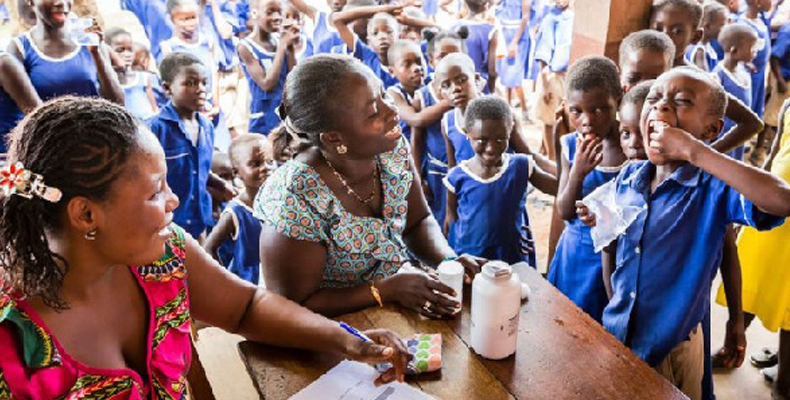 The praziquantel tablet – the medication used to treat parasitic worm infections like schistosomiasis- will be used for the nationwide exercise.

According to the programme, all regions and districts in the country are endemic for schistosomiasis, a worm infestation transmitted by direct contact with contaminated fresh water body inhabited by certain types of water snail which carry and release the infective worm.

Dr. Benjamin Marfo, NTDs programme manager, addressing the press, said the adult worm inhabits veins around the intestines or bladder of infected persons and lays eggs which penetrate the intestines to reach the stool or the bladder which is then passed out through the urine.

“When eggs in stools or urine of infected person get into contact with slow flowing fresh water, the eggs hatch into larval stage called miracidium. This miracidium infects snails in the water and undergo developmental stages that leave the snail as cercaria. The cercaria infects humans who come into contact with it in the water,” he explained.

Dr. Marfo said treatment of the disease which has symptoms of blood in urine, abdominal pain, diarrhea and blood in the stool is done with oral administration of the praziquantel tablet given according to the height of the infected person.

He said untreated bilharzia may lead to enlarged liver and spleen, fluid in the abdomen, bleeding tendencies and genital schistosomiasis which can lead to infertility in both men and women.

Deputy Director of administration, GHS, Martin Ankomah, in a statement, said aside the mass drug administration, there was the need for citizens to observe other control measures like improved sanitation and good personal and environmental hygiene.

Dr. Joyce Aryee, Chairperson of the event urged parents to support the exercise by encouraging their wards to participate.

“I humbly appeal to all parents to encourage their wards to participate in this exercise as the medicines as safe,” she said